Not necessary, but most of us probably want to take a camera along. If you have photography as a hobby, the equipment can be very heavy. In that case, lowering the weight of everything else in your pack will be even more beneficial. 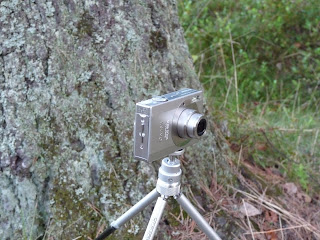 This is my favourite type of camera. Small, zoom lens to 3X optical, captures video as well and weighs less than 200 grams (0.44 lbs). This type of camera is under rapid development and the capacity increases every year. 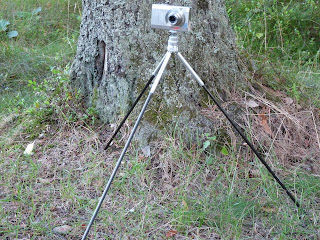 As I take photos for books, articles and the webb and hike solo most of the time, I have found that I need a tripod. Many views of the mountain are greatly enhanced by a human somewhere in the foreground and a tripod is almost necessary in order to be able to place the camera exactly where you want it.
Comments and conclusions: I am aware that many hikers are photographers foremost and hikers secondly. They simply want lots of often heavy camera gear. No problem, it is a choice. Some people carry climbing gear or fishing gear. All of these hikers benefit from lowering the weight of the gear they HAVE to bring, thereby creating more slack in the system which allows them to bring the stuff they WANT to bring.

Because I take photos for publication I have sometimes been forced to bring a heavier camera that can take photos in RAW format. But this format is also becoming available in these small cameras.

The tripod in the photo is sort of homemade, or at least enhanced at home. That is, I have taken a very ordinary table tripod and inserted three 600 mm long carbon fiber tubes inside the original legs. They are glued in place and a daub of silicon is inserted at the bottom end of each carbon fiber leg. This silicon seals the tube so that it does not collect moisture and debris, but also provides a bit more friction when placing the legs on hard surfaces.
Newer Post Older Post Home

Jorgen Johansson was a traditional backpacker for decades, hiking in many areas of the northern hemisphere. In 2003 he started experimenting with lightweight techniques and has since then published several books on this in Swedish, as well as the Smarter Backpacking series in English.He has a blog and also writes articles for outdoor magazines and lectures on lightweight backpacking. He lives outside Stockholm, Sweden.